A Note from Rick Davis 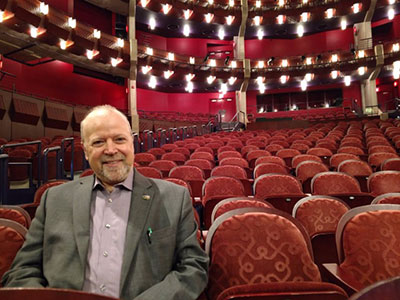 Of all the springtimes in my medium-long life, this one will forever stand out, because it follows a year-long winter. You’ll recall that it was mid-March 2020 when the world began to reckon with the scale and severity of the pandemic, and arts venues began to close precipitously. The last Hylton Presents performance was the great guitarist Milos on March 8 – and the show that got marooned by the final shutdown was Manassas Ballet Theatre’s (MBT) “Les Sylphides and More!” scheduled for the following week. Then came an almost ten-month hiatus from live indoor performance in the presence of an audience. Winter had come again.

Note the italics above, however. Because even though a heavy blanket of metaphorical snow kept our theaters from fulfilling their usual functions, our intrepid community of artists, production staff, educators, and you, our patrons, found ways to keep the tender green shoots of performance alive.

Some of us went from digital consumers to producers in a heartbeat, and some of us (see me with my hand raised?) took a little longer. Our Mason Arts at Home and Hylton at Home webcasts started up on April 2, 2020 and have not stopped, offering a wide variety of programming from educational content and artist interviews to fully-produced concerts and shows. Our Arts Alliance members created Zoom rehearsals and workshops and streamed performances. Our Veterans and the Arts Initiative shifted its service online quickly, and has now been nationally recognized for the success of that pivot. (I promised myself I wouldn’t use that word, but there it is, for the last time).

Making use of a natural slope in the land behind the Hylton Center, we debuted Hylton on the Hill in October, bringing live musicians together with an audience for the first time in about eight months. And when the second offering in the series (the Grammy Award-winning band Ranky Tanky) got rained out, we used our new skills and equipment to bring them into Merchant Hall, and they did a beautiful concert, which looked and sounded great on the web a little later in the season.

In a bit of poetic justice or calendar karma, MBT, the group that was left in the lurch last March, came back in person to do what seemed the impossible, but they made it work – a physically-distanced holiday Nutcracker in front of a very small (but very happy) audience in Merchant Hall, heralding a cautious, slow, modified, but persistent return to the stage.

But now… spring is, maybe, possibly, here for real. More of us are getting vaccinated every day. Guidelines for performance venues are changing for the better – still with safety uppermost, but potentially with fewer restrictions. Hylton on the Hill returns at the end of May, with picnics encouraged and, we hope, beverages for sale!

And just recently I sat in Merchant Hall to witness a beautifully sung and fully staged production by our wonderful Mason Opera theater students and alumni. Live, indoors, and in the presence of an audience, those singers made Samuel Coleridge Taylor and W. A. Mozart really, well, sing. I knew then, for sure, that this year of winter is almost over. Happy Spring!