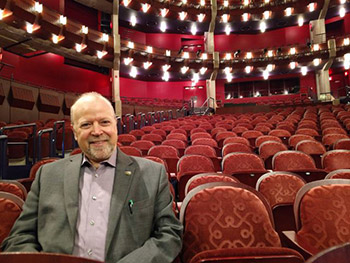 It’s that time of the year — the little pause between the end of one season (whether in nature or in the decidedly unnatural world of the theater!) and the beginning of the next. As I write this on a June afternoon, summer’s heat is not yet fully established and the memory of winter is receding. And the anticipated joys of the Hylton Center season to come are beginning to eclipse the cherished moments of the season just past. So allow me to reflect on some favorite Hylton Center memories from the past year and, in so doing, invite you to do the same.

Your hard-working Executive Board, a group of 19 individuals appointed by the members of the Tripartite Agreement that founded the Hylton Center (Prince William County, the City of Manassas, and George Mason University) held a wonderful strategic planning retreat with the staff and other volunteers in February, facilitated by Duncan Webb, an internationally-renowned management consultant who, not coincidentally, did the initial feasibility planning and market research for the Center some fifteen years ago. Duncan’s insights (and the ones he coaxed from all of us in the room) will guide us as we revisit the strategic plan over the coming year. It was also nice to see one of the “godfathers” of the Center return and be impressed — even a little amazed — at how much we have accomplished in our nine years of operation, including the very tangible evidence out front, as the Education and Rehearsal Wing continues to take shape.

The Veterans and the Arts Initiative had a banner year, scoring a legislative victory in Richmond, receiving statewide and national recognition in various forums and conferences, and most importantly, continuing to deliver innovative and impactful programs for our Veterans and Servicemembers and their families. Our Education programs offered amazing opportunities across many genres to thousands of “kids” of all ages from the very young to the — let’s say, not so very young, and increasing accessibility and inclusion as well. Our Hylton Presents, Matinee Idylls, Hylton Family Series, American Roots Series, Summer Performances for Young Audiences, and Hylton Center EXTRA! programs brought a stunning diversity of high-level professional artistry to the community, and the community’s own talent was on display thanks to the great work of our Arts Partners and Affiliates, which continue to grow in quality and impact both on stage and off.

Everyone will have their own “favorite of favorites” performance, and I hesitate to take sides, but here goes: the Gourmet Symphony performance in Matinee Idylls, where the Gregory Family Theater became a theater-in-the-round as those incredible musicians took the audience through a full-course menu of Beethoven and haute cuisine, linking two great forms of human expression and literally sharing their meal with us; the Academy of St. Martin in the Fields Chamber Ensemble (one of the world’s greatest, and also winner of the longest title of a performing group), whose concert in Merchant Hall was nothing short of sublime; guitar giant Will Ackerman sharing an impromptu summit with our old friend Shaun Hopper (his opening act, invited back on stage for the grand finale) was another highlight. Chanticleer. Every year. And finally, a show I missed belongs on this list too, The Seldom Scene in our American Roots Series — only because we had been trying to book that great group for years and finally did, and everyone said it was great, and I was out of town. So let’s call it the best concert I never saw. Perhaps my favorite moment of all, though I (as one of the creative team) say it as probably shouldn’t, was the highly successful collaboration with the Washington National Opera ‘s Domingo-Cafritz Young Artist Program on April’s “Raising Voices ” concert. Not only did our Mason Opera students and alums work seamlessly with the emerging professionals from downtown to create a beautiful opera program, but we planted the seeds for future projects that will bring high-level operatic performance back to the Hylton Center. Stay tuned!

It’s been a great year at your friendly neighborhood world-class performing arts center. I can’t wait for the season to change again (summer, I’m talking to you) so we can see what’s next!